Six Figures in a Couple of Weeks!

This client wanted to end 2019 on a strong note with one of their premiere services. So we sat down and came up with a special email campaign designed to hit their lists hard with entertaining, but value-driven, copy driving traffic to their free webinar series.

By tapping into the fun but no-nonsense personality of the client, I was able to craft a campaign of more than a dozen emails for the first week, several a day, in multiple voices for their different lists.

Then, at the end of the week, I jumped into Slack and asked the point man on the project how things were going…

For them, it was a strong start, and we saw the potential to keep it going. Because the client has me on a retainer agreement (ask me about them – this is why you want it), they were able to ask me to put together a handful of emails to go out the second week, continuing this push and extending the deadline for the readers to jump in and purchase their memberships.

This is a great strategy to keep a campaign fresh, but also take advantage when one is doing well! And thanks to our retainer agreement, all they had to do was ask me to write a few more.

Keeping with the personality (and the holiday theme of the emails), I wrote a handful of messages for them to send out, including one with a GIF of Clark Griswold. Because, come on, it’s Christmas.

Here’s what it looked like (with the screenshot of the GIF timed perfectly): 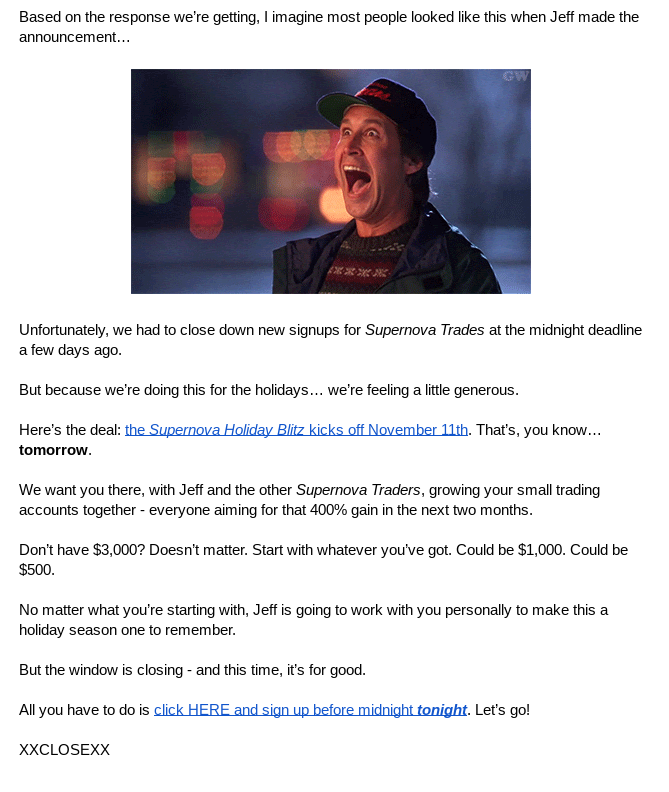 What happened? When I checked in at the end of the campaign, here’s the response I got:

The next time you start doubting the power of email marketing, I want you to read the following statement, which is 100% true: a handful of extra emails sent to the client’s email lists doubled the revenue of the campaign in one week.